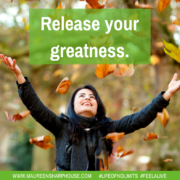 “The greatest limitations you will ever face will be those you place on yourself.”

Your mind is  being continuously fed and programmed

You may not always be aware of it at a conscious level, but thoughts are being fed to your mind continuously on a daily basis. Well-meaning parents, siblings, teachers, family members, friends, colleagues, doctors, employers, neighbours, the programmes you watch on television, the books and newspaper you read, the internet and social media and the environment you live in all continuously feed thoughts and messages to your mind.

Some you will find yourself replaying over and over (especially the ones that hurt or challenge you!)

In time those thoughts become the beliefs you hold. You come to see them as your reality and truth.

That’s all great when the beliefs are positive and empowering ones – but too often in life, you find yourself held back or imprisoned by limiting or negative beliefs.

Maybe for you, you have grown up being labelled as a ‘slow learner’,  ‘disabled’, a ‘born worrier’,  or ‘no good’ at maths or spelling?

Or perhaps you have been seeing a certain lifestyle, career, or unconditional love, as being totally outwith your reach?

• What beliefs do you hold that have been getting in your way up until now from creating change in your life?

• Where and who do you think those beliefs come from? Your mother? Father? Teacher? Colleague? An incident or event? Relative? Friend? Or Other?

• In what way have those beliefs impacted you? And impact on your life?

• If you continue to hold these same beliefs and don’t challenge or question them what impact do you see these beliefs having on you? Now and as you move forwards? In 1 year? 2 years? 5 years time?

• On a scale of 0-10 how important is it that you establish new beliefs and more empowering ways of thinking? (0 being not at all and 10 being absolutely vital)

More empowering beliefs will serve you much better

• What new empowering beliefs could you form now that would serve you much better?

• What actions would those new thoughts and beliefs empower you to take?

• What would the potential impact of those actions and new beliefs be on your life?

• What would the potential impact be in 1 year? 2 years? 5 years time?

• How important is it for you on a scale of 0 to 10 (0 being not at all and 10 being absolutely vital) that you start to form these empowering beliefs right from this moment now?

Know that whatever limiting beliefs you may have held about yourself up until now, may not actually be true for you in reality. Remember the story of Roger Bannister, who ran the first sub-four-minute mile?

Up until May 1954, it was widely believed that it was not possible for a man to run a mile in under four minutes. What’s more, it was believed that even if it was possible the human heart would physically explode!

Then along came Roger Bannister who turned both of those beliefs on their head….

Roger was a medical student at the time and as part of his medical research came to the conclusion that there was no physiological reason that man couldn’t run a mile in under four minutes. More importantly, he came to the conclusion that the human heart could and would take the strain. He was so confident of his findings that even though he wasn’t a serious athlete at the time he boldly announced to the world that he would prove it. And on 6th May 1954, that’s exactly what he did – running a mile in 3 minutes 59.4 seconds and setting a new world record.

As peoples beliefs changed, so did their performance. The ‘impossible’ was now deemed ‘possible’.

The perceived limitations of the human body had solely existed in peoples minds.

I urge you to let new possibilities enter…

Whatever has been holding you back in life from making the changes you want to make, I urge you to breathe in clear new fresh energy now and let new possibilities, thoughts and beliefs enter. Open your mind now to the fact that the limiting beliefs you have held about yourself may not necessarily be true.

Most of your beliefs will have been thoughts fed to your mind that you have replayed over and over. And you don’t have to take each thought on board, give it importance or believe it to be true….

Make this your time to release your greatness:

Want to join the discussion?
Feel free to contribute!

Are You Living The Life You Want? Or Are You Getting In Your Own Way?

What is NLP? How NLP Can Help You Live Your Best Life
Scroll to top
We use cookies on our website to give you the most relevant experience by remembering your preferences and repeat visits. By clicking “Accept All”, you consent to the use of ALL the cookies. However, you may visit "Cookie Settings" to provide a controlled consent.
Cookie SettingsAccept All
Manage consent

This website uses cookies to improve your experience while you navigate through the website. Out of these, the cookies that are categorized as necessary are stored on your browser as they are essential for the working of basic functionalities of the website. We also use third-party cookies that help us analyze and understand how you use this website. These cookies will be stored in your browser only with your consent. You also have the option to opt-out of these cookies. But opting out of some of these cookies may affect your browsing experience.
Necessary Always Enabled
Necessary cookies are absolutely essential for the website to function properly. These cookies ensure basic functionalities and security features of the website, anonymously.
Functional
Functional cookies help to perform certain functionalities like sharing the content of the website on social media platforms, collect feedbacks, and other third-party features.
Performance
Performance cookies are used to understand and analyze the key performance indexes of the website which helps in delivering a better user experience for the visitors.
Analytics
Analytical cookies are used to understand how visitors interact with the website. These cookies help provide information on metrics the number of visitors, bounce rate, traffic source, etc.
Advertisement
Advertisement cookies are used to provide visitors with relevant ads and marketing campaigns. These cookies track visitors across websites and collect information to provide customized ads.
Others
Other uncategorized cookies are those that are being analyzed and have not been classified into a category as yet.
SAVE & ACCEPT